I'm no Montessori expert....so i apologise in advance to anyone who has studied the Montessori method for my clumsy hap-hazard attempt at implementing some concepts!

There are many good Montessori blogs around.....I took this lesson from Montessori for everyone.

I like the Montessori ideology, and wish I'd known about it years ago so I'd have had time to learn properly instead of rushing around now trying to find quickly some lesson to try with K! K generally responds well to Montessori lessons as they are visual and hands on...something which definitely helps K to learn I find, alhamdulillah.

A little while ago I'd made the Montessori grammar symbols, however I decided to invest in purchasing a set alhamdulillah. I've had them a few weeks now, and thought I really should start using them inshallah!

Some months back we did a lesson regarding nouns and proper nouns following Jolly Grammar. So as it was something K had some experience with, I decided to start with this.
I explained again what a noun is, giving some examples and said that we would use the large black triangle to help us to identify which words are nouns inshallah. 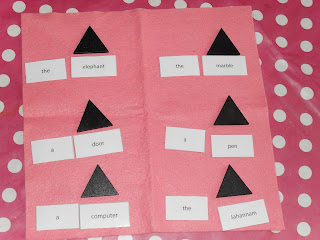 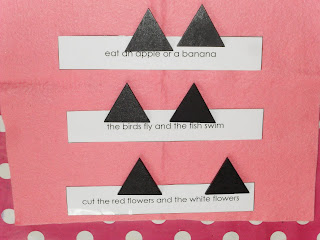 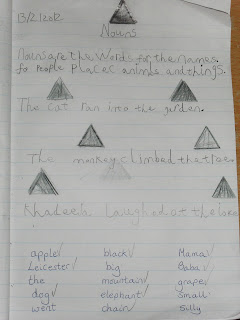 I'm sure if i had learnt grammar in this way when I was at school, I'd have had a much better understanding (and memory) of what all the grammar rules are today!
I really like the Montessori grammar symbols, as eventually a young child should be able to dissect each word in a complete sentence, knowing which is a noun, verb, adverb, pre-position etc etc....something I think most adults can't even do!