This is for yesterdays Tuesday group mummys - so everyone knows what their little ones have done all afternoon inshallah! :)

Following the lesson objectives from the science curriculum on the Schemes of work site, this weeks lesson  dfocussed on various properties found within materials and understanding that  despite being different materials they may have the same properties.

We had on hand a tray of items each made from either metal, fabric, wood, paper, plastic or glass but also including blue-tack, play-doh, glue and paint (to help define other properties which are not contained in the more solid materials like wood and metal etc). 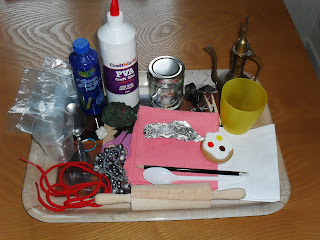 I briefly explained what the meaning of material properties are and gave examples, using the items on the tray - identifying differences in different objects made from the same material (for example - plastic - we had a plastic cup, plastic disposable cup and plastic sandwich bag - each object had different properties although they were made from the same material - the plastic cup was strong and hard - the disposable cup was squashy and transparent, the bag could be folded and torn! etc etc) as well as property similarities between different materials.

The play-doh and blue tack look and have similar textures. So I asked the kids to stand on the left if they thought play-doh would be stretchy, to stand on the right if they thought the blue tack would be stretchy or to stand in the middle if thought both stretch. (kids all went to different locations)
We tried to stretch the play-doh but found it just broke where as the blue-tack had a veeeeeeery long stretch!

The same with the PVA glue and paint - they look similar in appearance in terms of texture and the way they pour however the glue is sticky!

We played a game to help solidify kids knowledge and understanding of using property vocab associated to different materials.
The kids had to work out which item from the tray had been selected, by asking questions from ready prepared cards.  A couple of the girls took turn to answer for an object I selected whilst the others looks away. I had planned all the girls to take a turn but unfortunately there wasn't enough time! :( 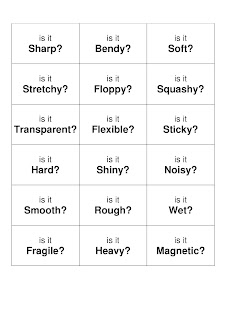 (can be downloaded inshallah HERE!)


I used cards rather than allowing them to ask their own questions, as i wanted to ensure they would go through different properties, rather than all just asking the same question each over and over!
Each card was then placed in either a "Yes" or "No" group - to help remind them what the properties of the selected item had, to aid them in identifying it. 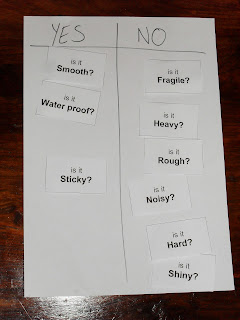 I think this one was PVA glue 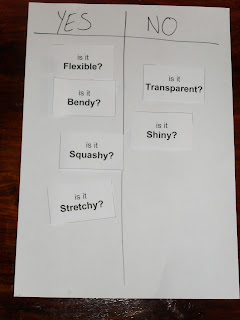 Kids took a snack break before the final task. We took one item made from each material in order to identify selected properties, and recorded the results in the table, which was then used to help see that various different materials can have the same properties (available to print inshallah HERE!). 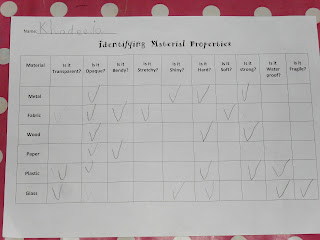 When it came to identifying if each material is water proof or not, we used water to find out!. So they all took turns pouring the water onto a different item.....(over the safety of a bowl of course!) 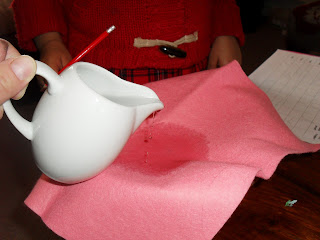 Each child then took turns to use the results in the table, to list the group of materials which was recorded within each property.

.....and the kids were relieved when it was aaaaall over! :) They had a quick 10 minute break before we started geography....written up in next post inshallah. 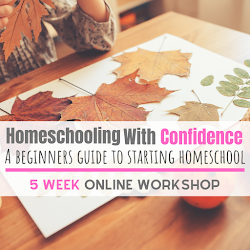