Printable time line with both Hijri and Gregorian calendar dates 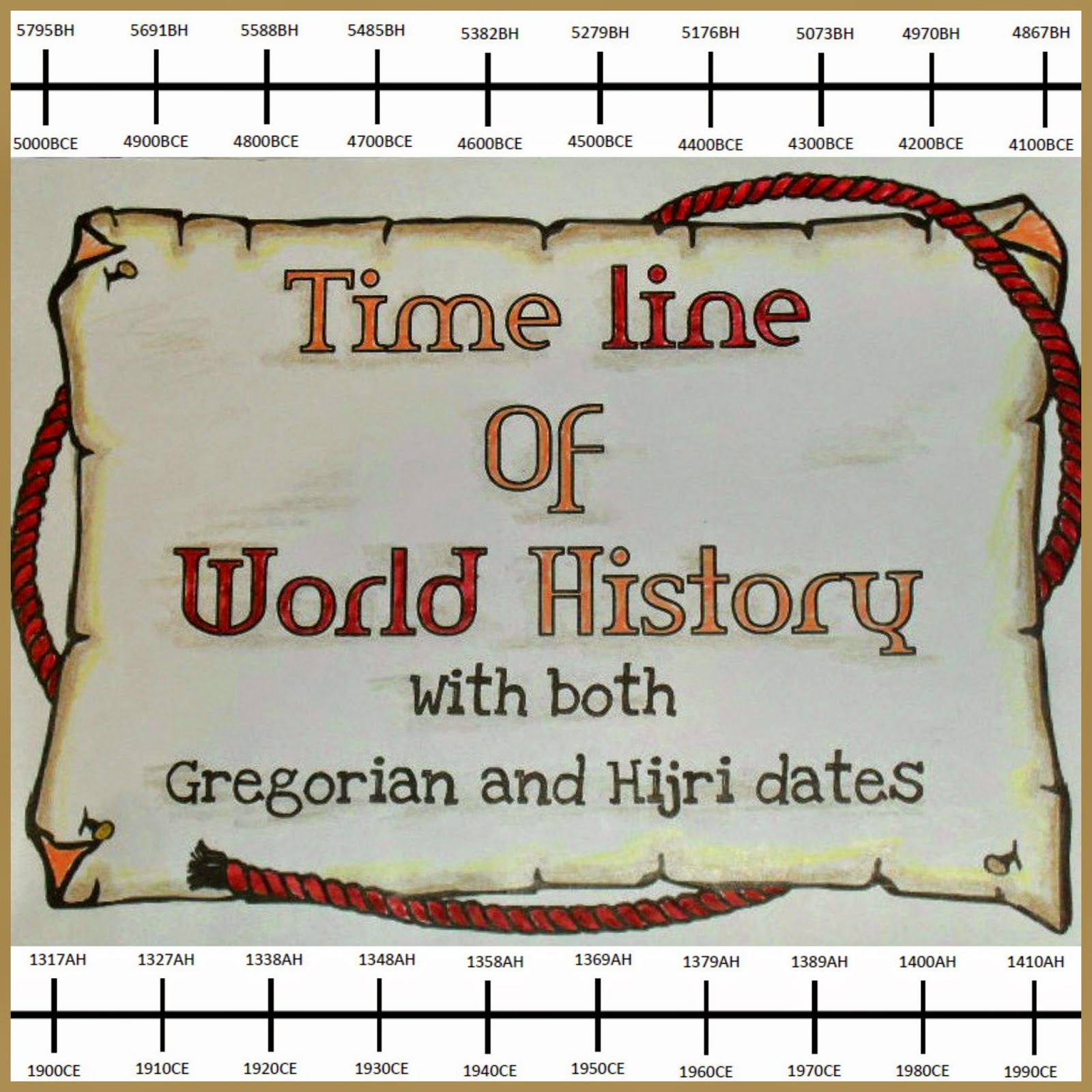 Have you ever wondered who lived first; the Maya or the Aztecs? Do you know what was happening in England and America at the same time as the Prophet Muhammad صلی اللہ علیہ وسلم was born? What about the rights of women throughout different parts of both the Muslim and non-Muslim world 100 years ago...?

Time lines are an awesome way to compare and visualise the chronological order of historical events and people throughout the ages; making it easy to answer these questions!

If you search the internet you can find plenty of ready to print time-lines both on sale and free....however finding one which incorporates the Hijri calendar is difficult if not impossible!

As Muslims, the Hijri calendar is something which is of great importance to us - yet sadly, it is often neglected in favour of the Gregorian calendar which most of us living here in the West are more familiar with. Many of us don't have any comprehension of the Hijri dates .... if we ask ourselves what is today's Hijri date; do we know it? ....Let alone asking what was happening in the world 200 years ago according to the Hijri calendar!

Alhamdulillah, with the help of online date converters, we have produced a 31 page time line with dates from both the Gregorian and Hijri calendars, beginning at 5795BH / 5000 BCE up to 1441 AH / 2020CE - allowing you to map out the events of world history in the Muslim and non-Muslim world side by side!

The dates are marked using BCE (Before Common Era) and CE (common Era) as opposed to the Christian based designations of BC (Before Christ) and AD (standing for the Latin phrase anno domini meaning in the year of our Lord).

The pages are blank, allowing you to add information according to your own studies, be that through writing or pictures.
It will be interesting to be able to see and analyse events and lifestyles during the same periods across the globe - specifically in comparison to Islamic events during the same eras.

If you line up the pages side by side to tape them together at the back, forming a huge long line of sheets; you can then fold it concertina style (like a fan) giving you a time-line book you can flick through, picking out specific historical periods......or..... 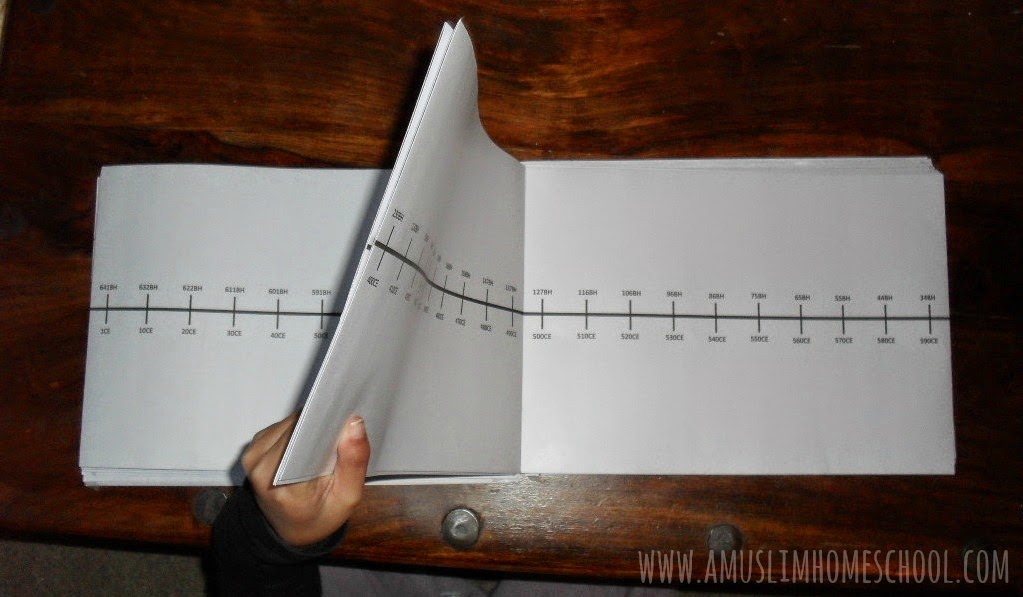 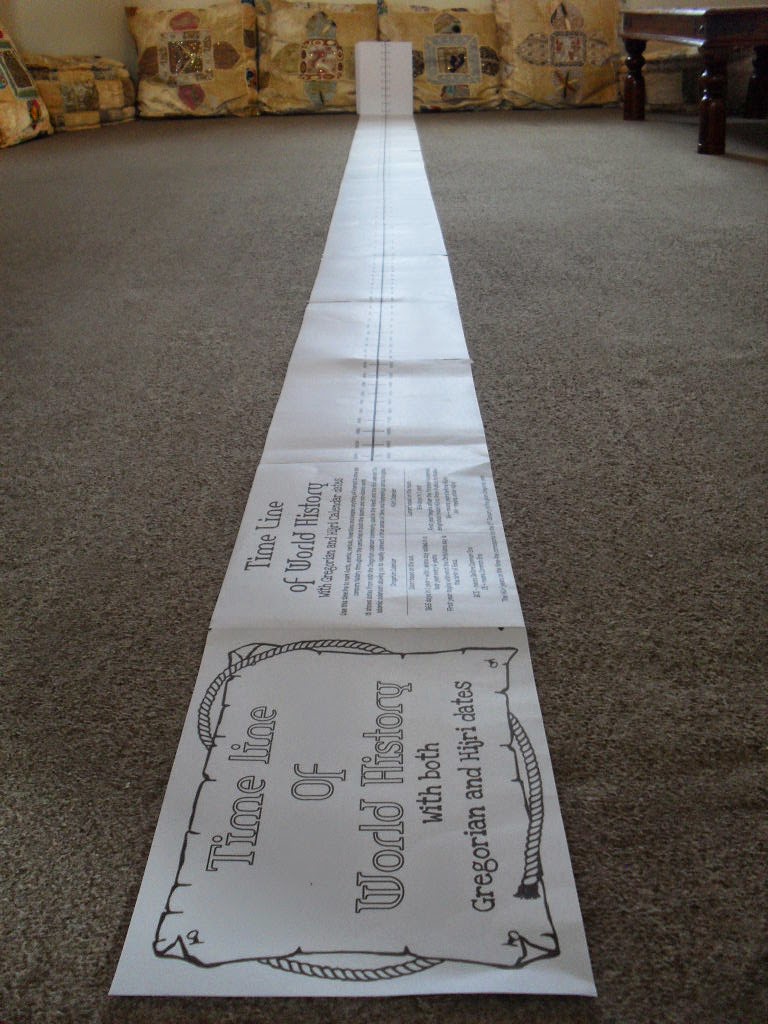 Add information to your time line as you study and learn new historical facts! You can write your information as well as include inanimate(*) drawings or images of relevance.
Be careful not to allow your children to draw images of people / animals but focus instead on landscapes, buildings, clothing etc. (see footnote below). 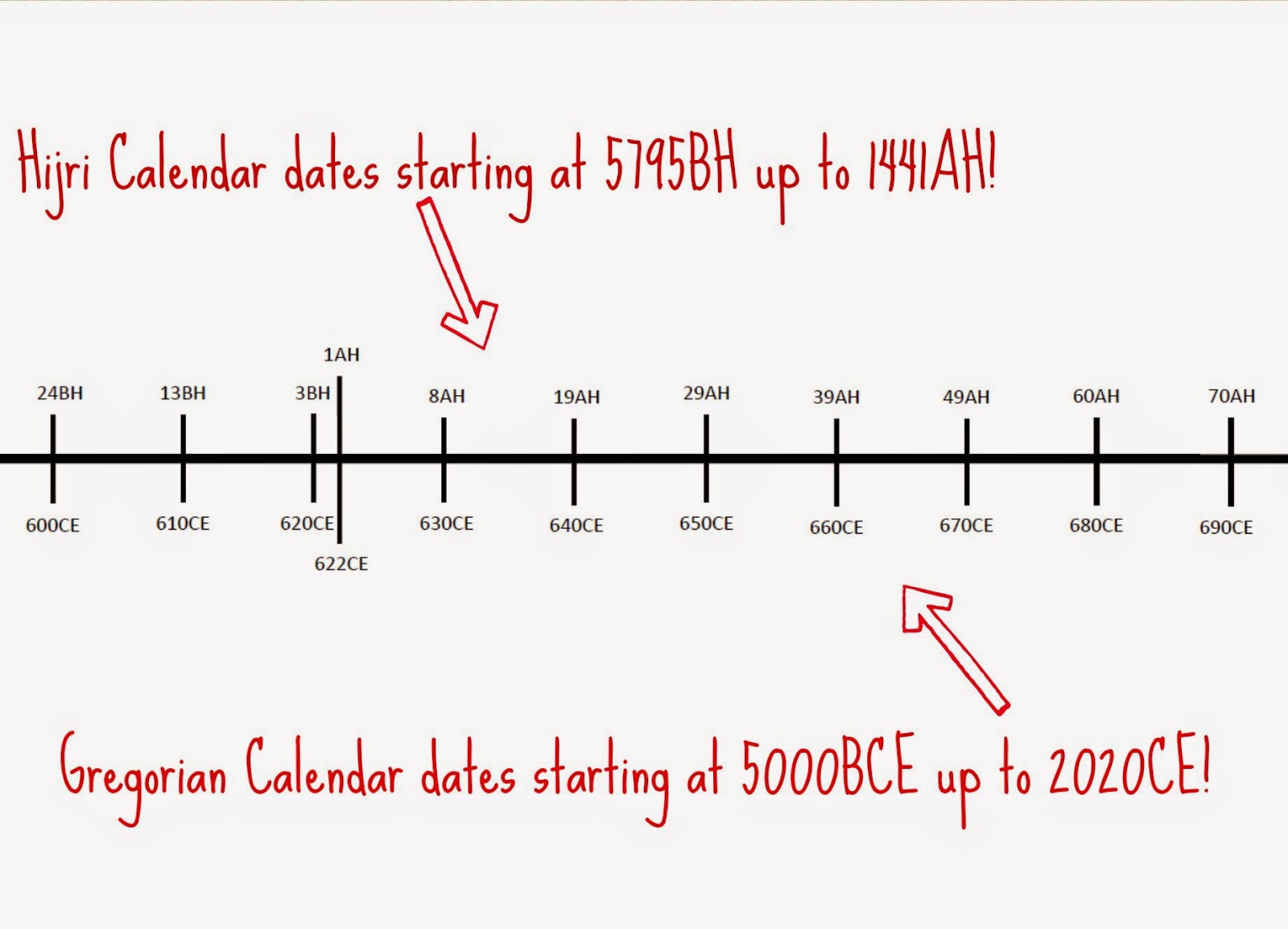 To download and print, just click onto the high lighted text below!
{Printable time line with both Hijri and Gregorian calendar dates}
Footnote:
* It is not permissible for the Muslim to draw pictures of animate (living) beings.
Narrated Muslim: We were with Masruq at the house of Yasar bin Numair. Masruq saw some images (or pictures etc) on his terrace and said, "I heard 'Abdullah saying that he heard the Prophet صلی اللہ علیہ وسلم saying: "The people who will receive the severest punishment from Allah will be the picture-makers."
Sahih Al-Bukhari #5951
Narrated 'Aisha: The Prophet صلی اللہ علیہ وسلم  never used to leave in the house anything carrying images or crosses but he obliterated it.
Sahih Al-Bukhari #5952
Narrated Abu Zur'a: I entered a house in al-Madina with Abu Hurairah, and he saw a man making pictures at the top of the house. Abu Hurairah said, "I heard Allah's Messenger صلی اللہ علیہ وسلم  saying that Allah said: "Who would be more unjust than the one who tries to create the like of My creatures? Let them create a grain; let them create a gnat"....
Sahih Al-Bukhari #5953
Narrated Abu Talha: Allah's Messenger صلی اللہ علیہ وسلم said: "Angels (of Mercy) do not enter a house where there are pictures."......
Sahih Al-Bukhari #5958
Narrated Salim's father: Once Jibril promised to visit the Prophet صلی اللہ علیہ وسلم  but he delayed and the Prophet صلی اللہ علیہ وسلم  got worried about that. At least he came out and found Jibril and complained to him of his grief (for his delay). Jibril said to him, "We do not enter a place in which there is a picture or a dog."
Sahih AL-Bukhari #5960
Narrated Sa'id bin Abu Al-Hasan: While I was with Ibn 'Abbas a man came and said, "O father of 'Abbas! I am a human being and my sustenance is from my manual profession and I make these pictures." Ibn 'Abbas said, "I will tell you only what I heard from Allah's Messenger صلی اللہ علیہ وسلم . I heard him saying, "Whoever makes a picture will be punished by Allah till he pits a soul (life) in it, and he will never be able to put soul (life) in it." Hearing this, that man heaved a sigh and his face turned pale. Ibn 'Abbas said to him, "What a pity! If you inist on making pictures I advise you to make pictures of trees and any other inanimated objects having no souls."
Sahih Al-Bukhari #2225﻿