Today was our Tuesday Science class with several other home educating kids alhamdulillah. The lesson was from the National Curriculum describing different materials.

Each of the children brought several objects made from different materials which we put onto the table. 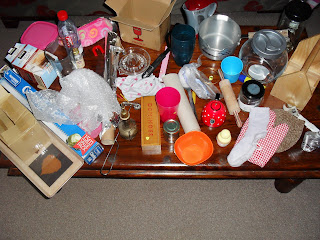 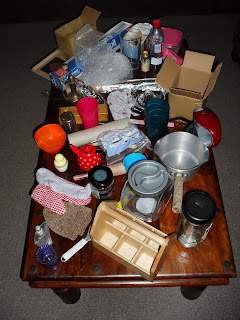 I laid out labels on the floor naming some different materials : Plastic, Wood, Glass, cardboard, Metal and Fabric. 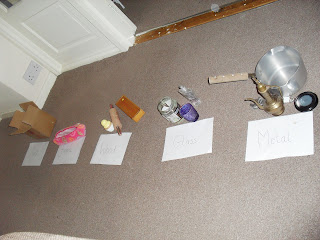 We first had a look at the items on the table and briefly talked about some materials (very briefly!) before we played a game - each child took in turns to select an object from the table and place with the correct label.
I asked them to think about how they feel when deciding (as they found some items difficult to identify) and they helped each other too.

Here's the finished groups after the sorting was complete. 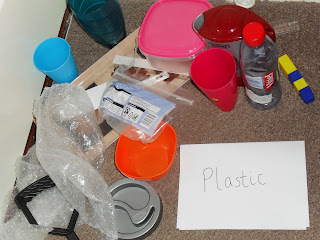 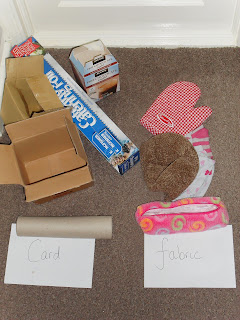 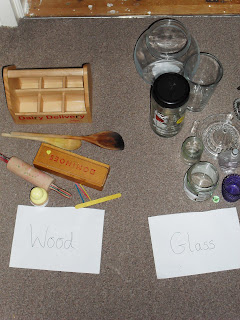 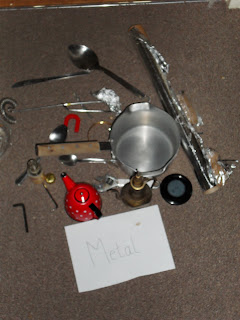 ﻿Whilst sorting we identified the glass jars had metal lids so we separated them in order to put into the correct material category accordingly.

Although this isn't covered according to the national curriculum in this unit, we also separated the metal into 2 groups, magnetic and non magnetic. I briefly explained that there are different types of metal and some stick together and these are magnetic. Metals which don't stick are non magnetic. (I know its not a very scientific explanation...but thought would serve as a simple basic intro for when magnets are properly introduced later inshallah... !). The kids took turns using a small horse-shoe magnet to pick a metal and see if they stick. Those which did the kids identified are magnetic, and those that didn't they identified were non-magnetic. 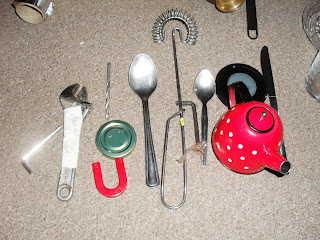 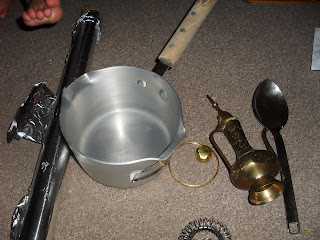 The non-magnetic metals. (I told the kids to move their feet back but Z had to sneak in - just noticed now!)

We looked at the tin foil and noted how it was different to the other metals because it was so thin. The same with the bubble wrap plastic compared to the other harder plastics.

We also talked about the practicalities of materials and how some materials are better suited for certain things than others.
To give a couple of examples, I took a glass and filled with water, explaining its good to use a glass to drink, as the glass contains the water.
I then asked what they'd think would happen if we had a "cup" made from fabric rather than glass! They thought I was crazy! We took a sock (over a bowl) and poured water to check what would happen. (they found it hilarious!) 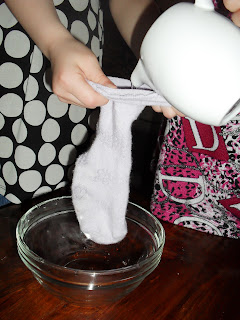 ﻿
We  looked at the wooden table and compared it to a bed mattress. The remaining children (who didn't do the sock experiment) took turns laying on the table to test how comfortable it is if they were to sleep on it.
We also took a large cushion and questioned its use as a table, asking would we be able to write upon it?
Thus giving a basic understanding to how different materials are better suited for different purposes.

The kids then filled in a worksheet, drawing a picture and naming 2 objects for each material category.

This all took about 2 hours to complete - we didn't finish everything detailed according to the national framework site, so still some elements of the unit to complete - such as looking up reference books to find out more about each material and choosing objects to describe its feel. But I figured the kids could go home and do this for homework inshallah :)