Sibling Rivalry - what to do when kids won't stop fighting 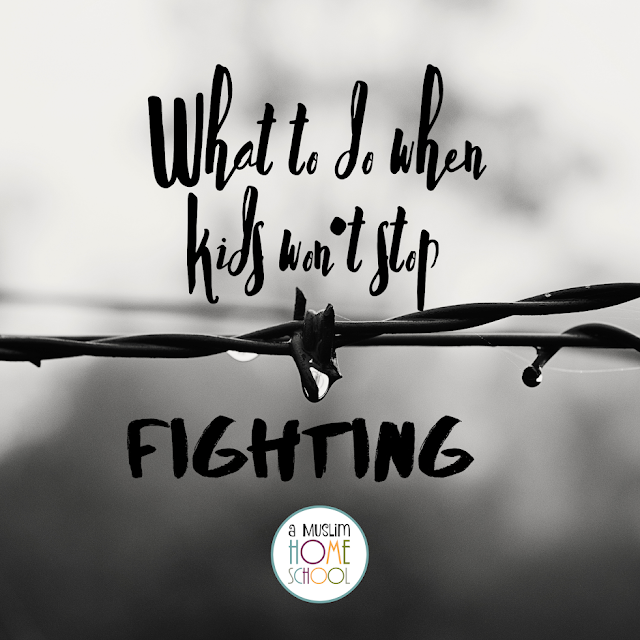 Recently I ran a pole over on Instagram, asking if your children ever fight, bicker and squabble. A whopping 82% of you answered "all the time".

This is what I know....when your children are at each others throats, it always seems like they are the only children in the world who don’t seem to be able to get on.

It can also feel at times that they seem to hate each other, which is heart breaking to see.

Firstly let me assure you that your children truly are not the only ones in the world who are always bickering (I personally attest to that!). Secondly, they don’t hate each other - even if it might seem so at the time.

You and I both know that it’s so easy to pick up on the negative interactions between siblings and point them out. However it's not so easy to notice when they’re actually getting along nicely and make a show that we saw it in quite the same way.

So the first thing you can do, is make a conscious effort to notice the children getting on together, so that both you and they realise that it’s not all quite so doom and gloom.

You see, when we have the idea in our mind that things are a certain way, we look for situations to affirm that, becoming locked in this perpetual state of negativity. So look out for the positive and make a big deal out of recognising it to break away from that search for constant battle you're so used to seeking.
This will help you to see things are not as bad as you have yourself believe, and also, it will allow the children to feel their good behaviour with one another has indeed been recognised and affirmed which should help encourage more of the same inshaAllah.

This is all indeed well and good; looking for the positive. But what about when they are thick in the midst of a physical or emotional fight! What then?

To stop our children fighting, we parents have to be proactive not reactive.


It is so easy to react to the war cries of our children with our own screams and frustration; especially when they are trying so hard to drag us into their sorry dispute.

But you need to remain cool as a cucumber. For you are most certainly the captain of this ship and its your job to make sure it doesn't sink. Once you let panic and emotion take over, you've lost before you've even tried.

So be proactive to the situation; take charge and maintain control instead of reacting to it. Remember that your kids may be at war.....you my sister are not. 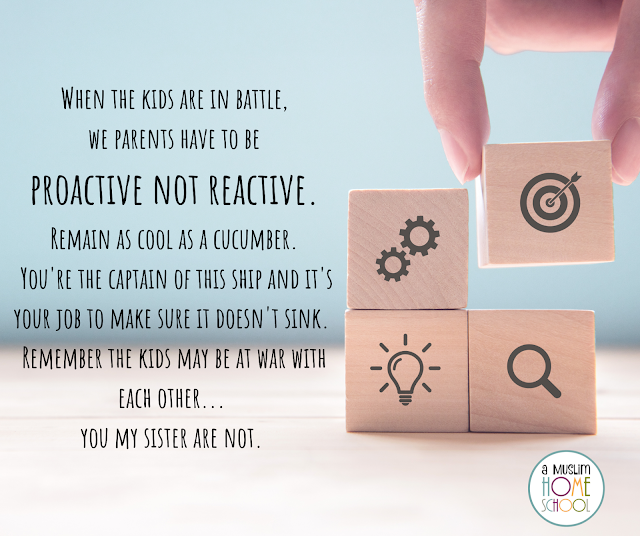 Acknowledge your child's feelings instead of dismissing them


The story each child tells around the events of fighting with their sibling, will undoubtedly be subjective and highlight the plight of their own victimhood. It isn’t about trying to work out who is in the right and who is in the wrong. Because whatever the case, it doesn't really matter "who started it", they are both now hurting.
Whilst any child feels unheard, resentment will always ensue and the root causes of their apparent bickering will rarely get resolved.

So talk to them. Let each tell you how they feel about what just happened. Don’t shut their feelings down or dismiss them. Rather, acknowledge them. Put how they feel into words for them. Doing this doesn’t justify anyone’s behaviour choices. However, you are merely allowing each child to be heard; to have how they feel recognised and acknowledged…because the reality is, whatever they’re feeling (regardless of whether its justified or not) is their truth.

So when someone comes running screaming that a sibling said something mean or punched them in the leg, instead of telling them to ignore it, acknowledge them. Put into words how they feel.

"Being punched in the leg hurts"
"Hearing that makes you upset."
"You look frustrated and angry right now."
"You didn't expect her to say that."

You’re not condoning what was said or done on either side. Nor are you taking sides. You’re simply acknowledging the subjective feelings that are felt in that moment; because those feelings are true for that child, and often all our children want is to feel we have heard them. Its when they don't, that they will more often than not take matters into their own hands and more chaos rains down.

Help your child to be proactive instead of reactive


You might encourage your child to think proactively himself instead of reacting back, asking him what could he do to handle this situation? In this way he might suggest himself he should ignore his sibling, or come tell you when there is a problem he can't handle.
Usualy our children know what the right thing to do is....but their emotions often get the better of them. Gently prompting your child to think rationally helps to bring back calm, and helps to build the idea of new behaviour patterns and understanding that he doesn't always need to react, and by not reacting he actually maintains control of the situation (which when you think about it, often siblings are fighting because they feel that control has been lost to the other).

Encourage him to remember the Sunnah, and prompt him to recall what our Prophet taught us to do when someone upsets us, or we get angry.


Something else you might find helpful, is sofa talk. Sit both / all the kids down and have a ball or a cushion ready.
Invite each child by turn to communicate to their siblings how they feel and why. They can only speak when they have the ball or cushion in their hands, until then, they must remain silent.

Once the first child has got everything off his chest, the ball goes to the other child/ren, who will then repeat back what he heard was said. It is important they are only repeating back what was said; regardless of whether or not they agree with their siblings interpretation of events, and without adding their own narration or feelings.

Go back to the first child and ask if what was repeated back is correct.

Then the second child gets his opportunity to explain how he feels and why. In the same way the other(s) repeat back, and continue until everyone has been heard.

Doing this firstly, helps to calm the situation. And secondly, helps them to talk through feelings that quite often children have difficulty articulating which is why its so easy for the fists to come out in the first place!

Will they ever stop squabbling?


Many of us have grown up arguing with our siblings. And most of us outgrew it as we aged alhamdulillah. It seems that sibling rivalry is part and parcel of family life. Whilst it wreaks distress upon mothers across the world, it is something that should phase out inshaAllah, so long as we keep making dua, and be proactive ourselves in helping them to manage and control their own feelings and actions.

A book I've personally found quite helpful is Siblings Without Rivalry by Adele Faber and Elaine Mazlish. It's a pretty awesome book full of practical strategies to help manage our children's sibling battles and can be picked up second hand on Amazon or Ebay. So if you want a helping hand getting control on your kiddos constant feuds, I'd recommend taking a look.
It goes without saying, as a secular book not absolutely everything will comply with our principles as Muslims, but the authors still hold many valid points of benefit, with practical examples of how we can help our children to communicate their feelings through means other than their fists or horrible words.

Whatever disputes your children get into, maintain your own composure. Don't let your emotions react to meet theirs, because then you're entering the war with them.

I'll end here by saying, take some comfort in the fact it's not just your kids who fight....82% of us face the same.

The struggle is real. 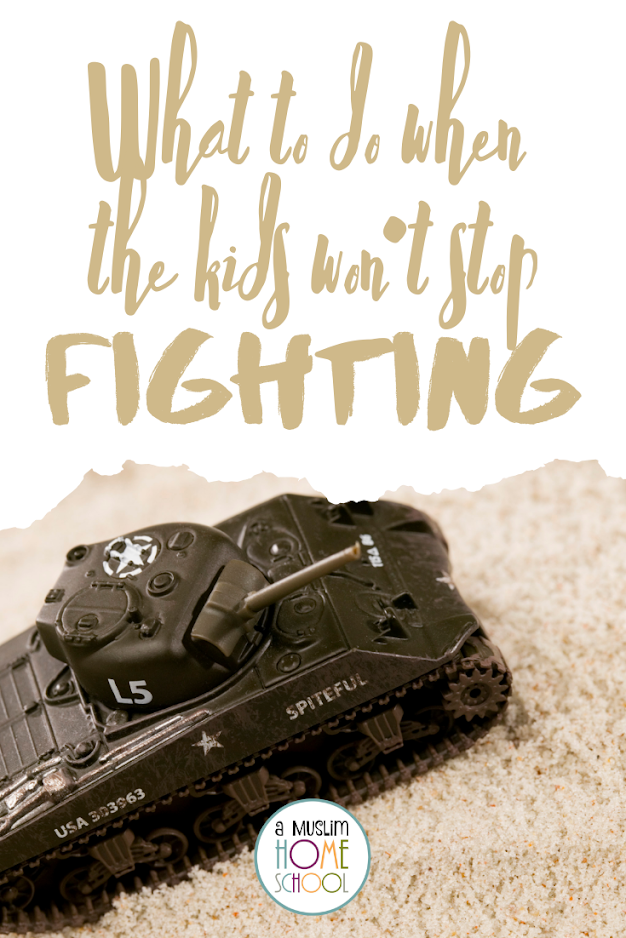 Email ThisBlogThis!Share to TwitterShare to FacebookShare to Pinterest
Labels: Parenting