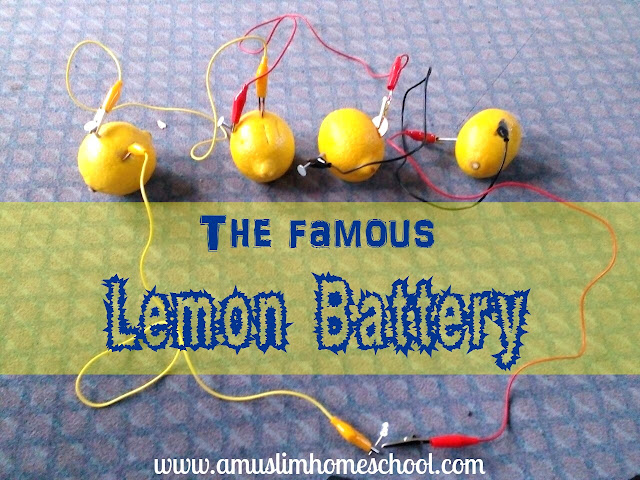 Did you know you can use lemons to make a battery? Well, you can subhanAllah. Its not going to power the kettle in the kitchen.....but it will light up an LED diode inshallah!

All you need are:
4 or 5 lemons,
galvanised (Zinc coated) nails,
penny coins or something else that is copper
and some wires / crocodile wires

Simply,  insert one nail and one coin into each lemon (use a knife to make a small slit for the coin). Then attach the nail from one lemon to the coin in another, creating a series of connected lemons. You will end up with one last nail and coin on the end lemons. These connect to the diode, that should light up! 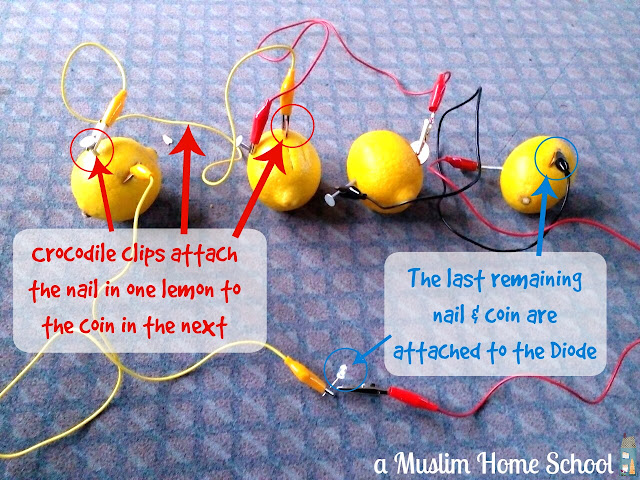 We did this in our home school science club today. Before I showed the girls how to connect it, we sat in a circle on the floor and they each had a go at trying to figure out how to light the diode themselves. 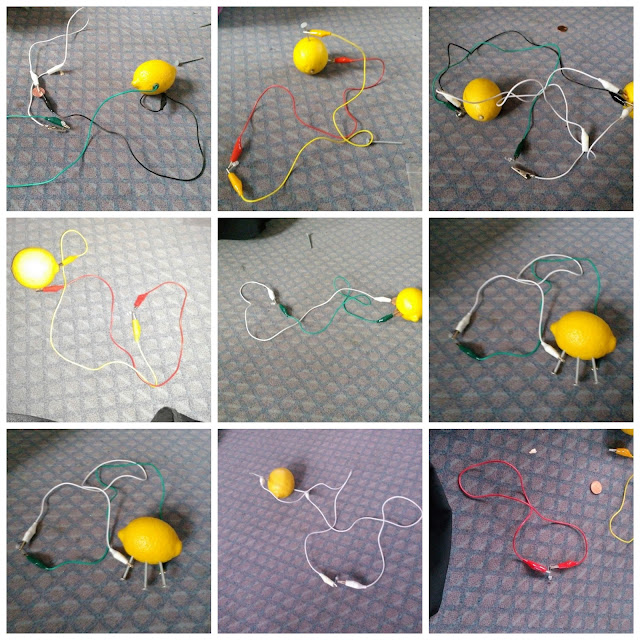 The lemons don't contain electricity as some people think when they hear "lemon battery". Rather, a reaction takes place between the Zinc coated nail and copper penny coin that is inserted into it. So when you join everything up as a circuit, it allows the flow of electrons, creating an electrical current and thus powers up the diode!

Basically, science teaches that atoms are kind of like lego bricks.....they are the building blocks of everything.
Atom means "that which can not be cut", it can not be divided. If you took a piece of fruit and cut it in half, then cut those pieces in half again, and those pieces in half again, and again and again. Continue to cut in half, until you eventulay need a special machine to keep cutting because your knife is just not fine enough! You would cut through the cell and be able to still keep going, until you reach a point you can no longer divide. This last piece, is the atom.

You can truly grasp how tiny atoms are when we take a look at how many are in a grapefruit. To see how many are in a grape fruit, blow it up to the size of Earth....yes earth. Now, imagine that the atom in comparison to our Earth size grapefruit, is the size of a blueberry. Now imagine filling up this earth size piece of fruit with blueberries and you will have an idea of how many atoms it contains subhanAllah! (it makes me think of the hadith which mentions that whoever has faith in his heart equal to the weight of an atom (or a small ant) will be taken out of Hell. (1 - see foot note below)

What has all this got to do with electrons? Located in the centre of the atom is something called a nucleus (this is not the same nucleus as that in a cell) which is made up of Protons and neutrons. Orbiting this nucleus are the electrons. These electrons can jump from one atom to another, and it is this flow of electrons which gives our electric current.

So there you have it, a battery made with lemons! ......if you own a lemon orchard, next time there is a power cut you'll know what to do!

Videos I found useful whilst researching this:
Lemon battery experiment (how to and scientific explanation)